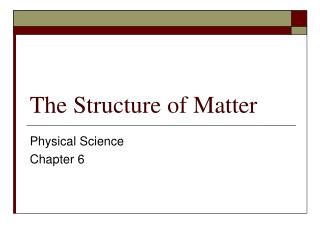 The Structure of Matter The Structure of Matter. Physical Science Chapter 6. Review. Compound: atoms of two or more elements that are chemically combined Most of the matter around us is a compound or a mixture of compounds Compounds have properties unlike those of their elements

The Structure of Matter

Living By Chemistry - . unit 1: alchemy matter, atomic structure, and bonding. in this unit you will learn:. what matter