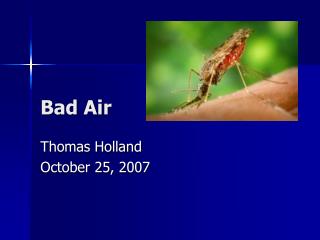 Bad Air. Thomas Holland October 25, 2007. “What is the most repeated failure in all of global health? It could well be the commitment to eradicate malaria.” Bill Gates, October 17,2007. 45 minutes from now you will know all of this:. Malaria epidemiology A historical perspective on malaria AIR POLLUTION IS BAD! - . ways to save the air and our earth. by: ally, holt, huntley &amp; trace. what is air

Swift Bad- Bad Credit Loans - Swift bad credit loans can help you get a loan up to $1500 dollars today. it's fast, simple

More Bad Reasoning and Bad Rhetoric - . violence to both people and logic. ad hominem fallacies about persons instead of

Bad Habits - . by : jean cruz, jessica david, and mara pascual. what is procrastination?. - avoiding things that need to