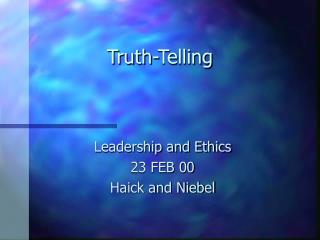 Truth-Telling. Leadership and Ethics 23 FEB 00 Haick and Niebel. Truth-Telling. Truth-telling, promise-keeping, and trustworthiness are values that are central to the Navy. Telling the Truth Lesson - . first grade-2013. tell the truth. we’ll play a quick game! 2 truths and an untruth can you

Telling ! ? - . sandra stewart with ideas borrowed from mara keisling. who are you ??. why this study how was it

How do you know when somebody is telling the truth

Truth telling and Lying: Is Deception Ever “Good” in Healthcare? - . the purposes. will explore the questions posed

Telling Time - . to 5 minute intervals. there are 2 hands on a clock. an hour hand a minute hand . the hour hand. is the