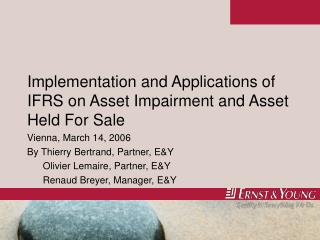 Implementation and Applications of IFRS on Currencies - . vienna, march 14, 2006 by thierry bertrand, partner,

Asset - . something that is useful because it helps you succeed or deal with problems. smarting. hurting with a stinging

Asset - . a useful and desirable thing or quality. organizational ability is an asset. asset has no synonyms. another