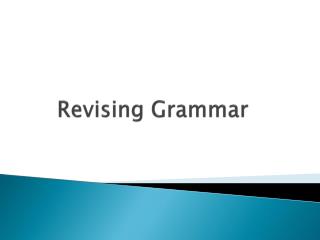 GRAMMAR. Revising Grammar. What is grammar?. Essentially, grammar is the set of rules used to ensure the correct use of language. Grammar is a vast subject so we are only going to brush up our skills on the following topics: verbs and tense commas apostrophes capital letters Revising - . and editing. news writing. all writing is rewriting. how to revise and edit news stories. remember the basic

Revising: - . looking for ways to make your draft better. revise for clarity and sense. by reading it aloud, you ask

Revising - . &quot;the difference between the right and the nearly right word is the same as that between lightning

Revising - . why revise a paper?. because… w riting is never done  we love to learn! it refines our already

Revising Practice - . replace boring verbs and average adjectives b oring verbs = is, are, was, were, has, have, had,

Revising Questions - . deshawna is evaluating the use of muggy, breezy, and hot in her description of the weather

Revising Checklist - . for “the scarlet ibis” interpretive essay. before we begin, you will need the following colors

Revising Essays: - . you can actually do it yourself. revision tool: star. s ubstitute t ake stuff out a dd stuff r

REVISING WRITING - . creating images, emotions, and voice with your words. use strong vocabulary. have your vocabulary

Revising Combustion - . revising combustion. walt: conduct an experiment and answer some questions about combustion. what

Revising = Rewriting - . or why your first draft should suck. revising = rewriting. what do we do with feedback? what not

Revising Maths - . how to use your revision sheets and success criteria. click on the icon below to see information on

Revising Writing - . adverbs. what is an adverb? can you identify adverbs below? it shows that there is a need to teach

Revising vs. Editing - . revising and editing are two different