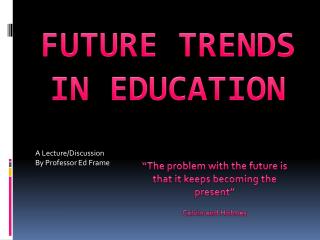 A Lecture/Discussion By Professor Ed Frame. FUTURE TRENDS IN EDUCATION . “The problem with the future is that it keeps becoming the present” Calvin and Hobbes. Here Comes the Future. “Two things make a great futurist; a fascination and interest in change and you don’t want to get an mba.”.

Engineering Education – The Future? - . dr.miri yemini miriye@sce.ac.il. the market is changing. the world is changing.

Welcome!! - . from abacus…. …to apps. textbook. online editions. epub. what are the trends in education?. mobile

Planning Your Career and Education - . chapter 5 . employment trends of the future. keep up with what is happening in the

Education and Action for a Sustainable Future - . debra rowe, ph.d president u.s. partnership for education for

Future Trends in Education: Where are We Heading? - Ferran ruiz i tarragó generalitat de catalunya departament