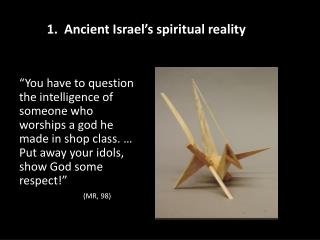 “You have to question the intelligence of someone who worships a god he made in shop class . … Put away your idols, show God some respect !” (MR, 98). 1. Ancient Israel’s spiritual reality. 2. Ancient Israel’s political reality:. T hey are surrounded by three superpowers. Ancient Israel: Kings - . prime real estate. a. canaan was frequently fought over because: 1. it was an important

Ancient Israel - . the children of abram. 5 themes of geography:. location/region : israel is in the middle east. it is

Ancient Israel - . early israelites. built a kingdom in canaan, today this area is lebanon, israel and jordan belief in

Ancient Israel: Abraham through Jacob - . abraham. abram (the man who god made his covenant with to make him the father