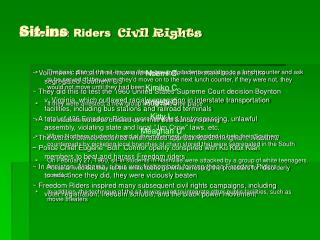 Freedom Riders - . dondree woods mr. glasson. the freedom fighters were a group who wanted segregation to end. their

Freedom Riders - . john, it is now 1:30 a.m., but i have been unable to sleep so will kill the time by writing you

Freedom Riders - . founding and purpose . on may 4 th of 1961, the congress of racial equality (core) organized

Freedom Riders - . by: miranda and mackenzie. date and place. spring of 1960- 1961 travelled on buses from washington ,

The Freedom Riders - . by attiyyah abdullah. background info. 1961 a group of black and white males and females boarded a

The History of the Freedom Riders of 1961 - . by mrs. zimmerman (for student use only). who were the freedom riders?.

The Freedom Riders: A nonviolent approach to a slow victory - . by: ashton fontenot. who are the freedom

Wave Riders - Criterion 4. wave riders. “the move towards efqm”. 3b consulting “your first step towards business

Patriot Guard Riders - We have one thing in common besides motorcycles. we have an unwavering respect for those ...