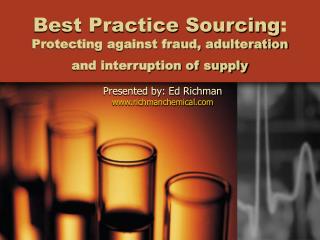 Best Practice Sourcing : Protecting against fraud, adulteration and interruption of supply. Presented by: Ed Richman www.richmanchemical.com. Introduction. What can happen? How bad can it get? How do you reduce or eliminate risk?. Learning from History. Past Catastrophes: Sourcing Analytics Training - . contents. this training pack is designed to give an analyst a comprehensive overview of

Food Adulteration - . food adulteration. definition: it is an act of intentionally debasing the quality of food offered

HAPTER 5 - . computer fraud and security. introduction. questions to be addressed in this chapter: what is fraud, and how

Fraud Examination - . accounting 537 m. popowits. enron. agenda. intro to fraud, what it is, what it isn’t, what it

Colors I Like (in this presentation) - Anti-fraud and the internal audit function proactive measures for finding fraud,

SAS 99 – Consideration of Fraud in a Financial Statement Audit - . the new fraud standard’s impact on auditors and