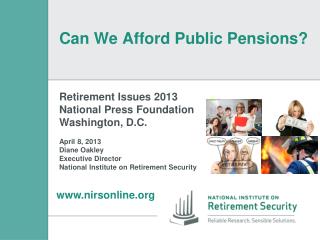 Public Enterprise and Privatization: An Introduction and Overview - . admn /826 public enterprise, privatization and

This is what happens when you can’t afford a real speaker! - . okay, i have a lot of material to cover today, so to

Pensions and Other Postretirement Benefits - . 17. i agree to make payments into a fund for future retirement benefits

You Can Afford to be a Family Physician - . mark a. goedecker, m.d. york hospital family medicine residency clinical camp

Business Development Global Pensions 2005 - . pension models around the world. global pensions is proud to present you a

Planning for Your Financial Future, Part I: What Women Need to Know about Pensions and Retirement Savings - September 6,