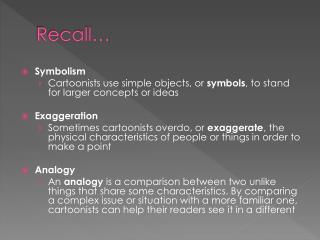 Recall…. Symbolism Cartoonists use simple objects, or symbols , to stand for larger concepts or ideas Exaggeration Sometimes cartoonists overdo, or exaggerate , the physical characteristics of people or things in order to make a point Analogy Rizal - . source: jose rizal gregorio zaide and sonia zaide. recall that: . there are a lot of events that happened not

Bernhard Riemann - . “it is difficult to recall another example in the history of nineteenth-century mathematics when a

Module 3 - . lesson 2 - enthalpy changes in chemistry. objectives. must recall and use the term standard conditions

Sometimes the Technology, but Always the Thinking - . your reflection / recall sheet what i did my thoughts on that dr

Strategies to Help with Math Fluency - . developing fact fluency and quick recall of basic facts is very similar to being