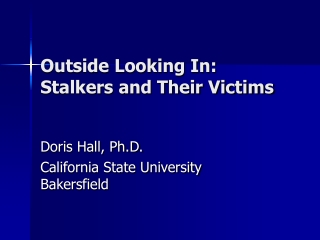 Moving Victims - . general principles. moving victims. a victim should not be moved until he or she is ready for

VWAP Overview - Goals of the training. refresher/basic training for vwlo and vwap representativesunderstand impact of

Ransom of Red Chief by O. Henry - . irony and tone. victims of kidnapping. do you recognize these names? read the

The career I chose was.. Special Victims Unit Detective - By; shianne sherrod. my daily tasks are to come in and be very

HOW IS THIS FAIR? - . one million children are victims of abuse every year. is it supposed to make you feel powerful?.

Testing a Victim-Focused Approach to ASB: Asking the Victims - . heather strang university of cambridge. why do we need