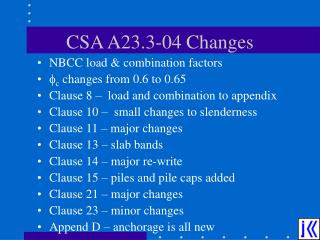 Seismic Design and Detailing of Reinforced Concrete Structures Based on CSA A23.3 - 2004 - . murat saatcioglu phd,p.eng.

CSA Exam - CSA ABC - How to pass the 13 ten-minute consultations of the csa exam? get to know all the smart methods,

The CSA - . guidance from trainees who’ve done it. what the rcgp has to say…. ‘an assessment of a doctor’s

CSA Preparation - . dr omar makki gp st3. why this presentation. my dear colleagues, i felt that it is my duty to share

CSA Practice - . clinical skills assessment (trivia). is it fun? no! is it easy to pass? no! is this a cheap exam? no!

CSA INTRO - . what is it. score card based on roadsides. why do you care. companies sms drivers pms. mvr -tickets csa

Adjective Clause - . an adjective clause is a subordinate clause used as an adjective to modify a noun or pronoun. the

Adjective Clause - . a group of words that begins with an adjective clause signal word, has a subject and a verb, and all

ADJECTIVE CLAUSE - . by: joshua m. capul. adjective clause. a dependent clause used as an adjective within a sentence .