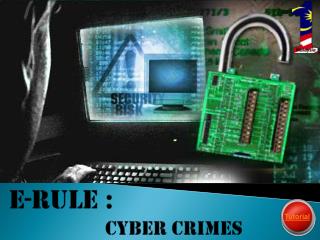 Tuesday, 12/4 Agenda - . finish doing drugs cyber-crime terrorism crimes of the powerful. illicit drug use and other

Parent’s Bullied + Cyberbullying Crimes and Retaliation is Real, but we can make a Difference, so lets start NOW! PAR

Crimes Against the Person - . agenda march 13, 2013. today’s topics introduction to criminal law state of mind vs.

Chapter 6 Criminal Law and Cyber Crime - . learning objectives. what two elements normally must exist before a person can

Crimes Against the Person - . agenda march 19, 2013. today’s topics taking care of each other crimes against the person

Cyber Crimes - . cyber crimes. indicate that the crimes are committed through the use of technology. also known as:

Chapter 6: Criminal Law and Cyber Crime - . learning objectives. what two elements must exist before a person can be held

Cyber Conflict Research - . rain ottis 7.09.2014. disclaimer. the opinions expressed are those of the presenter and

Cyber Bullying - . get the facts!. next. the golden rule. what is the “golden rule”? share some examples. why is