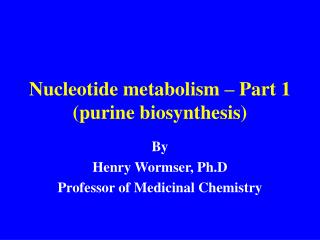 What Is Metabolism? - . catabolism reactions that break down compounds into small units. what is metabolism?. anabolism

Metabolism - . metabolism. metabolism is the set of life-sustaining  chemical transformations  within the cells of

Energy Metabolism and BMR - . energy: metabolism. ‘metabolism refers to chemical process that occur in the body that

Nucleotide Metabolism (and then, you know…) - . 1865 – gregor mendel : proposes the existence of paired factors of

FAT METABOLISM - . fat metabolism. carbohydrate metabolism and the metabolism of fat are directly connected and are under