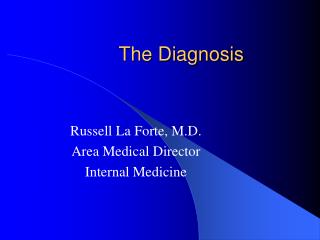 Diagnosis - . barium studies. demonstrate the primary lesion and reveal a synchronous cancer elsewhere in the colon  .

Diagnosis - . appearances to the mind are of four kinds. things either are what they appear to be; or they neither

Diagnosis - . diagnosis, explanation and the psychotherapy relationship. gallup poll (2005). how many americans believe

Diagnosis - . concepts and glossary. cross-sectional study. the observation of a defined population at a single point in

Diagnosis … - . using anatomy and physiology. how do we diagnosis?. patient has symptoms and signs. doctor tests for

Diagnosis - . based primarily on clinical symptoms and using laboratory test results as a secondary basis. the history of