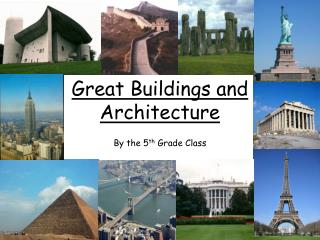 Great Buildings and Architecture. By the 5 th Grade Class. The Buildings of the World. The following slide shows some of the world’s greatest buildings. The students of the 5 th grade class worked hard researching, typing, and editing these reports and slides. We hope you enjoy them. Architecture (Buildings) - . around the world. a mosque. and another mosque. last one promise. a church. another one. a

Morocco Tours For Great Holiday With Ancient Buildings And Desert

Buildings in software And Software in buildings - . (a discussion about physical simulation and empirical modeling).

Buildings - . a house. a bungalow. a block of flats. types of houses in england. click on the link to see further

Buildings - . buildings. what makes these buildings look interesting?. what type of building are these?. many