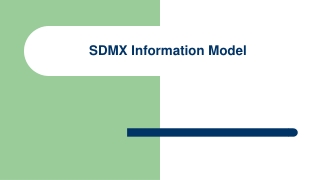 SDMX Information Model. Figures vs data. Number. Tourism establishments. Italy. Annual data. Figures by themselves are meaningless. For data to be usable, it must be properly described. The descriptions let users know what the data actually represents. 2529. ESCWA SDMX Workshop - . session: sdmx and data. session objectives. at the end of this session you will: know the