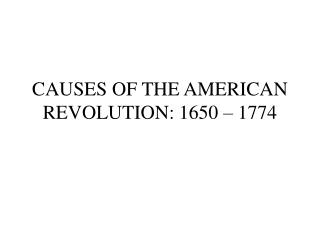 CAUSES OF THE AMERICAN REVOLUTION: 1650 – 1774. Two Revolutions? Anti-Imperialist or Social/Domestic. KEY CONCEPTS. Prior to 1763, American capital goes across the pond. French and Indian War transformed the relationship between Britain and the American colonies. Unit 4: The Scientific Revolution and Enlightenment (1650 – 1789) - . before the scientific revolution: renaissance

AMERICAN REVOLUTION - . ss standard: learn the principles of the us declaration of independence and the bill of rights

People of the American Revolution - . commander of the continental army during the american revolution. great leader and