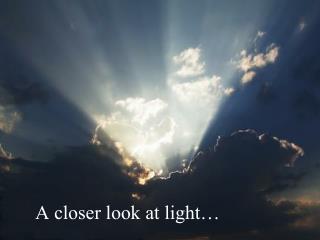 A closer look at light…. What is light?. Light is a form of electromagnetic radiation that travels in waves. Most forms of EM radiation are invisible . Light waves do not need a medium like water or air to travel through. Empty space is fine . Electromagnetic Radiation. And God said, Let there be light: and there was light. -- Genesis The Old Testament - . fiber high bandwidth low loss

How do you LIGHT Up your world ? Part I-Virginia SOL 5.3 - Exa min ing lig ht 20 04 with hands-on activities compiled

Light: The Astronomer’s Tool - . review of last time. in most cases, light is the only thing that astronomers can use

Light - . what you see (and don’t see) is what you get. theories of light. wave theory particle theory

Last Mass of the School Year May 24, 2012 - . gathering song. christ be our light. longing for light we wait in darkness.

3B MAS - . 4. functions. limit of a function. graphically the limiting value of a function f(x) as x gets closer and

Light - . colour. how do we see colours?. white light, the light you see from globes, fluorescent tubes or the sun, is