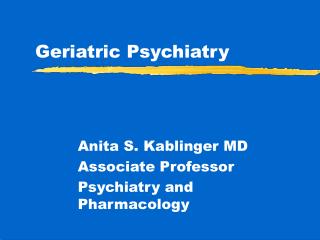 The Medical and Social Challenges of Aging with HIV - Alison moore, md, mph, facp professor of medicine and psychiatry

Chapter 32 Geriatric Emergencies - . objectives. there are no 1985 objectives for this chapter. geriatric assessment.

Everything You Need to Know About Geriatric Psychiatry in 75 Minutes - . andrea stewart, md, frcpc writer of lmcc, 2002.

History of Psychiatry and Psychiatric Nursing - . learning objectives. describe the various phases in the evolution of

33: Geriatric Emergencies - . geriatrics (1 of 2). geriatric patients are individuals older than 65 years of age. in