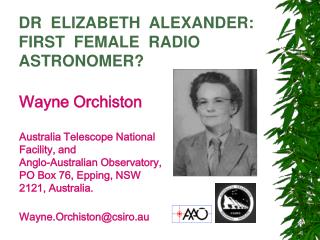 Why Radio? - . radio can reach on-the-go consumers! radio allows you to establish a special relationship with consumers.

Chapter 17 - . quasars and active galaxies and other ultahigh energy sources. what are quasars?. radio astronomy began in

Alexander Hamilton - . by: erin herock period: 2. “men often oppose a thing merely because they have no agency in

Nicolaus Copernicus - . 1473-1543 the first astronomer to formulate a comprehensive heliocentric model of the universe.

The Interaction of Radio Sources with X-ray-Emitting Gas in Cooling Flows - . elizabeth blanton university of virginia.

Alexander The Great - . presented by: jacob, will, justin, brad, krisha. alexander the great. “ there is nothing