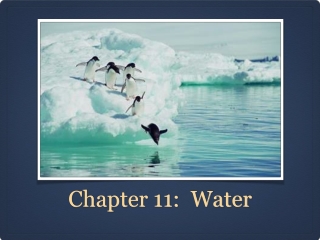 Chapter 11: Water. Section 1: Water Resources. Some of the water we drink today has been around since water formed on Earth billions of years ago Water is essential to life on Earth Humans can only survive a for days without water. The Water Cycle. water chapter 20 - What we will cover ?. discussion of labuses for water (20.1)water resources (20.2)water treatment

Chapter 10 - . water and the electrolytes. water: the internal sea. functions of water in the body solvent lubricator

Water: The Universal Solvent - . chapter 7. water. water is the only substance in nature found in abundance in solid,

Chapter 3 - . par 4: a cruise on the rhine. rivers are a part of the water cycle: the ongoing proces in which water

Chapter 3 - . water &amp; biology. h 2 o is why we are here. h 2 o molecules are polar what does their polarity

Water and plant cells (chapter 3) I. Background on water in plants II. The properties of water - Iii. understanding the