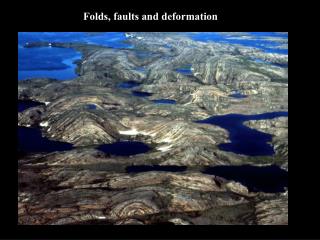 Folds, faults and deformation. Deformation of Rocks. Folds and faults are geologic structures caused by deformation. Structural geology is the study of the deformation of rocks and its effects. Fig. 11.1. Orientation of Deformed Rocks. Folds, Faults and Other Records of Deformation - . significance to ccs. fundamental to trapping configuration important

FOLDS and FAULTS - . stresses in the earth’s crust. stress can be compressional , tensional, or shear. compressional

Folds &amp; Faults - . words to know. rock strata these are rock layers under the surface. they are normally flat

DEFORMATION OF THE EARTHS CRUST • Types of Deformation 1. folds 2. faults - . folded rocks 1. due to compressional

11.2A Folds, Faults, and Mountains - . folds and faults . folds . over millions of years, stress forces can bend rock

Stresses, Faults, Folds, and Earthquakes - . types of stresses on layers of rocks:. types of folds anticline - an upward

11.2A Folds, Faults, and Mountains - . folds and faults. folds. over millions of years, stress forces can bend rock like

Folds, Faults, and Mountain Types - . folding. when rock is put under stress , it sometimes bends … this is called