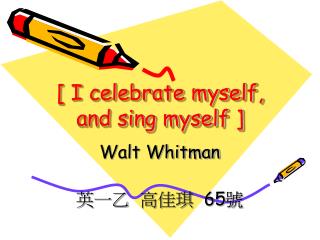 1 – Sing On - . 1. sing on, ye joyful pilgrims, nor think the moments long; my faith is heavenward rising with every

Celebrate - . by: cara edenfield g roupbygroup.wordpress.com. there are many contributions from the hispanic culture that

Conjugating ar verbs - . introduction. you already know how to say…. we like to sing . we are going to sing. we want

What do we celebrate for Christmas? - . robe &amp; mara. why?. . most people say they celebrate the birth of christ.

I could sing of Your love forever - . over the mountains and the sea your river runs with love for me and i will open up

Unit 5 Let's celebrate! - . welcome to the unit. 赵君凤. how do we celebrate chinese new year ?. children get red

SING FOR YOUR LIFE - . 2005 -. silver song clubs. delivered by sing for your life on a model developed by the sidney de

Sing to the King - . sing to the king who is coming to reign. glory to jesus, that lamb that was slain. life and

Sing It! - . sing and create your own song. songmaker

Elements of Poetry - . 11 th grade ms. polson. what is poetry?. a type of writing that uses language to express