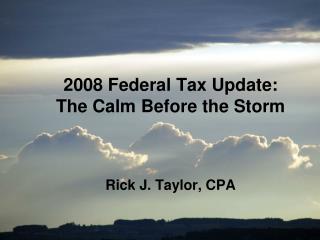 The Federal Income Tax Update - . dr. linda wang. a tax expert. who is the figure behind every great man, the individual

Calm after the storm? The Political Economy of Regulation After Crises - . by: michael lee indiana university. the

The Impending Tax Storm…are you prepared?