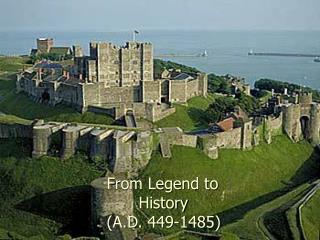 From Legend to History (A.D. 449-1485). The Conquest of Britain. Two groups of Celts from Southern Europe invades Britain between 800-600 B.C. The Britons settled on the island of Britain The Gaels settled on what is now Ireland Both were farmers and hunters organized into clans. 449-1485 - . the middle ages. overview. time of enormous upheaval and change in england. some of most famous and infamous