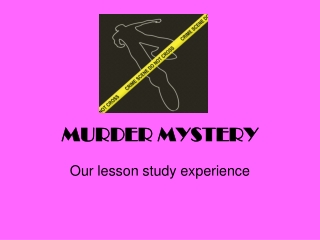 Murder Mystery 3 - . jewels or jail?. the thief looked down at the large box of glistening jewels sitting on the table

THE HOLY EUCHARIST - . what is a mystery. may 16, 2011 some people say it is not possible to fully understand a mystery,

Week 23, Day Three- Murder Mystery - . hw # 75- review your murder mystery work. be sure that your lab evidence report is

Mystery Writing - . the are the most observant of all genre heroes usually, the mystery solver is called upon to risk his

A mystery murder! - . who killed mr. simon p. ano? well, this song will tell you all about it. created by: juana

Welcome to KGV Mathematics - . mathematics murder mystery. a murder has been committed at castle pentagon. lord