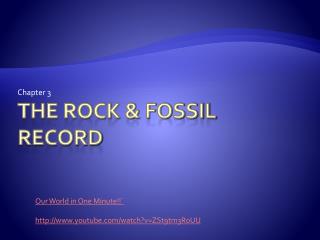 Chapter 3. The Rock & Fossil Record. Our World in One Minute!!` http :// www.youtube.com/watch?v=ZSt9tm3RoUU. Section 1: Earth’s Story and Those Who First Listened. The Principle of Uniformitarianism. The Fossil Record - . section 17–1 this section explains how fossils form and how they can be interpreted. it also

Paleobiology and Macroevolution - . chapter 22. 22.1 the fossil record. fossils form when organisms are buried by

Fossil Evidence Of Change - . fossil record. a fossil is any preserved evidence of an organism. plants, animals and

Activity 6 - . evidence from the fossil record. read the introduction. how were you able to use fossils in the last

The Rock Record - . chapter 21.1. the geologic time scale, based on fossil evidence , is used to organize the history of

Changes through time - . “survival of the fittest”. evidence that life has changed and is now changing. fossil

The History of Life - . fossils and ancient life. the fossil record provides evidence about the history of life on earth.

The Fossil Record - The fossil record provides physical evidence about history of life on earth. it shows how different