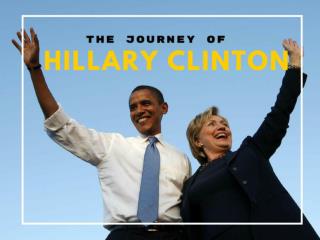 The journey of Hillary Clinton The journey of Hillary Clinton, from first lady to first female presidential nominee.

The journey of Hillary Clinton

Original presentation by the Hillary Clinton campaign - . revision of presentation that nobody asked us to undertake.

Impeachment of Bill Clinton - . by kylie shook and beth hess. when. bill clinton was impeached by the house of

Capitalization - . 1. the first word in a sentence. m y house is beautiful. 2. the word “i” my friend and i took the

The Clinton Years - . the main idea bill clinton was a new type of democrat, and his administration faced challenges for

Bill Clinton - . what were the successes and failures of the clinton presidency?. background information. born august 19,

THE HERO’S JOURNEY - . the pattern of all human experience. adapted from the hero’s journey: a guide to literature

Hillary’s husband re-elected: The Clinton marriage of politics and power - . objective: to analyse an article . my