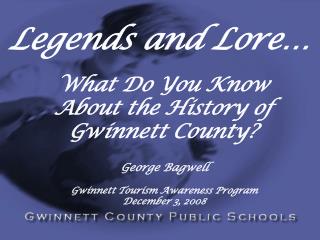 Legends and Lore…. What Do You Know About the History of Gwinnett County?. George Bagwell. Gwinnett Tourism Awareness Program December 3, 2008. QUESTION:. For what was the Runaway Bride’s house used in 1935?. ANSWER:. A temporary schoolhouse after Duluth School burned. Myths and Legends - . ‘black dogs of bungay’. question number 1. what is the name of the dog? black muck black sluck

Scrum Lore - . chickens and pigs a chicken and a pig are best friends. one day the chicken says to his friend, “i’d

Proverbs and Proverbial Lore - Key terms. proverb-is a popular saying in a relatively fixed form. proverbs are or have

Legends and Legacies - Perspectives on french-speaking africa. legends and legacies. for the benefit of our guests. this

P lore - . strategy for reading. p = preview. circle t itle – make a prediction picture walk—predict what it is about

Legends - . 10 th grade english- leach hero archetype 2011-2012 chhs. legends. are popular stories about the past that

Legends and Chivalry - . what is a legend?. a story or set of stories that are considered fiction handed down by

Weather Lore - . useful tool or just words. definition. in your own words, define weather lore/proverb. define who would