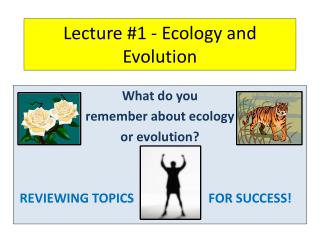 Lecture #1 - Ecology and Evolution. What do you remember about ecology or evolution? REVIEWING TOPICS FOR SUCCESS!. Reviewing Ecology vocabulary. VOCABULARY: Lecture 1 - “ biopharmaceutics as a theoretical base of medicines for pharmaceutical technology. the basic terms of