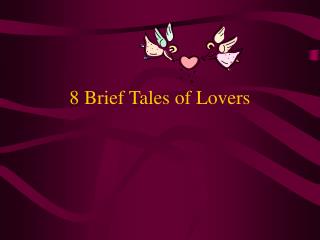 8 Brief Tales of Lovers. Pyramus & Thisbe. Pyramus & Thisbe lived in Babylon so close together that the same wall was part of each house They grew to love each other and wanted to marry, but the families would not let them Tales of Lovers - . pyramus and thisbe. orpheus and eurydice. ceyx and alcyone. pygmalion and galatea. baucis and

LOVERS of SELF - . lovers of

Lovers of Wisdom - . philosophy is an organized system of rational thought. seeks to fins answers through investigation

Tales Of Aphrodite - We deliver villas and apartments for short term rent all over cyprus. a property investment in one

Tons of Tales - . 8th grade literature unit mrs. schumacher. tons of tales. this unit will focus on fairy tales. the

Tales of Survival: - . how to work with two vendors to get a major database cleanup successfully planned and implemented

Heaven Of Perfume Lovers - Are you a perfume lover? this guide is solely meant for you

A Brief Overview Of The iPhone 8 - The iphone8 is apple’s tenth year anniversary phone. it has certainly come a long

Top 8 Features of iOS 13 iPhone Lovers Shouldn’t Miss! - Iphones never loses its charm. the reason behind that is

Animal Lovers - Pamela leutwyler there are 100 animal lovers at a picnic. everyone has a dog or a cat. 60 own dogs. 30