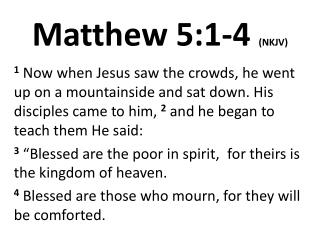 Matthew 5:1-4 (NKJV). 1 Now when Jesus saw the crowds, he went up on a mountainside and sat down. His disciples came to him, 2 and he began to teach them He said: 3 “ Blessed are the poor in spirit, for theirs is the kingdom of heaven.

The Torn Veil Of The Temple - . and, behold, the veil of the temple was rent in twain from the top to the bottom; and the

The Building of a Dream “…with God, all things are possible.” Matthew 19:26 - Kikuyu hospital dental clinic

My Monkey - By: caity emilie my monkey my monkey’s name is matthew. my monkey he is 4 years old. my monkey we feed our