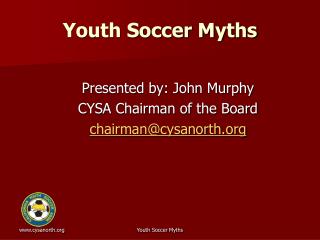 Youth Soccer Myths. Presented by: John Murphy CYSA Chairman of the Board chairman@cysanorth.org. Youth Soccer Myths. A “myth” is a popular belief that has grown up around something Or Something that has an unverifiable existence George Washington & the Cherry Tree . Problems with Myths Youth Camp - Spider Soccer - In this variation of soccer or international football, youth are bound together with 3 other

Midland Area Youth Soccer - . how to stop the scoring what to do when your team is obviously better than the