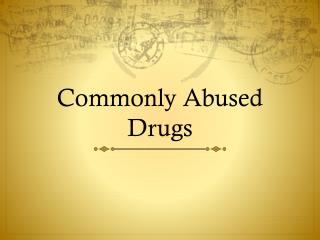 COMMONLY ABUSED DRUGS - . depressants. drugs are categorized according to their actions and effects on the body

Commonly Abused Drugs - . 1. depressants - slow down the activity of the brain and cns -alcohol - #1 mood altering

Most Commonly Abused Prescription Drugs - Most people take drugs as prescribed by their doctor. however, according to

309: An Overview of Commonly Abused Prescription Drugs - . learning objectives. participants will be able to: associate

10 Most Abused Drugs - Information about the most abused

Schedules for Abused Drugs - . james keefer addictions counseling. schedule i drugs. no legally accepted use for the

Sexually Abused Adolescents - . by: joseph edwards. what is it?. legal

Abused Pets Charity - . 4/4/14. situation. out of date kennels hidden location no one knows about. our current facility