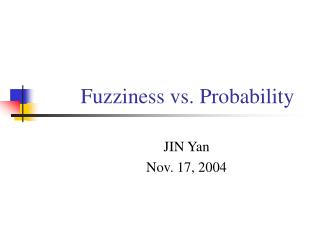 Fuzziness vs. Probability. JIN Yan Nov. 17, 2004. The outline of Chapter 7. Part I Fuzziness vs. probability Part II Fuzzy sets & relevant theories. Part I. In general, Kosko's position is: Probability is a subset of Fuzzy Logic. ODDS vs. PROBABILITY - . odds are a little different than probability. when we calculate probability, we look at the

Theoretical vs. Experimental Probability - . theoretical probability. based on what should happen in an experiment.