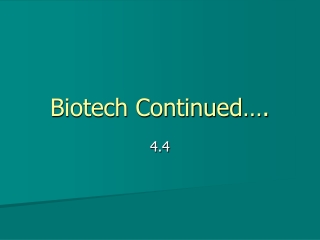 About the Biotech Industry - . a north carolina biotechnology center survey shows that 70% of biomanufacturing workers

What Investors in Pharma and Biotech are Looking for (and how to Meet those Expectations) - . nsep 1 st march 2005. value

Biotech hotbed - . uppsala bio. uppsala bio is an initiative from the local biotech industry, the two universities in

Biotechnology - . biotech. use of living systems and organisms to develop or make useful products. biotech. determining

Biotech - . southern blotting. through a series of steps, dna that has been separated by electrophoresis is applied to a

A General Biotech Overview - Ndsu biotech update. a general biotech overview. what is biotechnology ?. how about some

Biotech Lab #1 -Extraction - . extract dna from an organism’s cell to get the goi – gene of interest. biotech lab#2