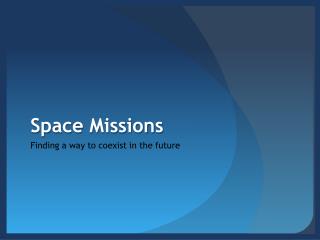 Space Missions. Finding a way to coexist in the future. Space Missions. * Early rockets were used to launch astronauts in a small capsule into space, while the rest of the rocket burned up in the atmosphere. Space Missions - . by: peter shen. mercury. the mercury program was initiated in 1958 and completed in 1963, and was the

Manned Space Missions! - . is it really worth it ? by: hazel eklund. yes! manned space missions are definitely needed.

Manned Space Missions - . by matt nicholson. why we need

Where Next with Space Missions for Exoplanets? - . there has been stunning progress in study of exoplanets it takes 10

Seven Sacred Space – The Wholeness of God’s Missions - . a s tewardship perspective the earth is the lord’s and all

Space: Missions, probes and beyond the solar system! - . new horizons. new horizons is a spacecraft. will pass within