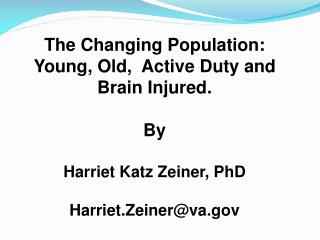 The Changing Population: Young, Old, Active Duty and Brain Injured. By Harriet Katz Zeiner, PhD Harriet.Zeiner@va.gov. A traumatic brain injury (TBI) is a blow or a jolt to the head that temporarily or permanently disrupts brain function – i.e. who we are and Active Duty Promotions to Cpl - General info. during this period of instruction i will use the lecture method with that

Changing Population Trends - . changing population trends. throughout history, and currently in many parts of the world,

Changing Population Trends - . a rapidly growing population uses resources at an increased rate and can overwhelm the

Young People – Old Problems? - . what are teens’ life ambitions?. they want to… enjoy life ? express their