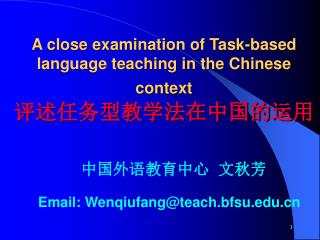 Techniques and Principles in Language Teaching - . yueh-chiu helen wang. introduction. the actions are the techniques and

Persuasive Language - . a guide to completing a successful language analysis. the task. analyse the use of language (both

Communicative Language Teaching - . (a functional approach since 1970s): it is an approach, not a method; a unified but

Co-TEACHING Service Delivery Model - . building background knowledge to close the gap for all students . co-teaching for

English Teaching Methodology - . class 2 what you should know about english teaching ?. reference books. techniques and