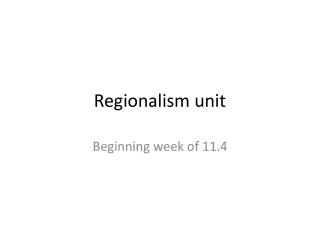 Regionalism - . by: brandon hunter, chandler roth, emily ranzau , and steven johnson. how does the zeitgeist of the

Regionalism - . a reaction against the modernism of the armory show. objective, representational art based on american

Regionalism - Everything underlined needs to be written in notes. regionalism. setting – time and place in which action

Regionalism - . structure and objectives of the lecture. section one: definitions of region. draw distinction between

Colonial Regionalism - . a review to date. colonial exploration by the british and spanish motivated by potential wealth,

Western Regionalism - Come, all ye sons of labor who wish to change your lot, who’ve spunk enough to travel beyond your