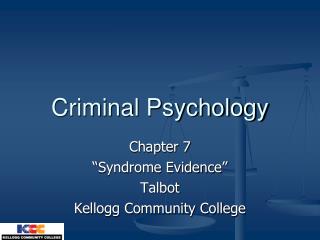 CRIMINAL PSYCHOLOGY - . part du: an overview of clinical psychology and disorders as it applies to criminology and

Criminal Psychology - . presented by: sadaf sajjad. crime. societies define crime as the violation of one or more rules

CRIMINAL PSYCHOLOGY - . definitions. crime. societies define crime as the breach of one or more rules or laws for which

Criminal Psychology - . what is criminal psychology?. the application of psychological principles to criminal activity.