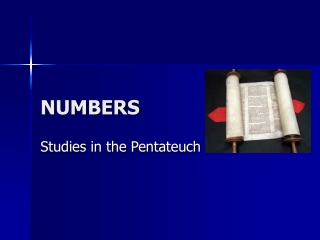 NUMBERS. Studies in the Pentateuch. A Play with 3 characters. The Title: Israel in the Wilderness The anti-hero: Israel The stooge: Moses The critic: God. 1. Israel. A complaining people Lack of food (Num. 11:4-35) Lack of water (Num 20:2-13) A rebellious people Numbers - . multiplying and dividing by powers. numbers. any number (or letter) multiplied by itself will result in a

Numbers - . first, review the numbers going from french to english. then try going from english to french. un. six. one.

NUMBERS - . cardinal numbers. there are over 7 billion people in the world today. survivor’s grand winner gets a 1-

Numbers - . lesson 1: factors and multiples of whole numbers. todays objectives. students will be able to demonstrate an