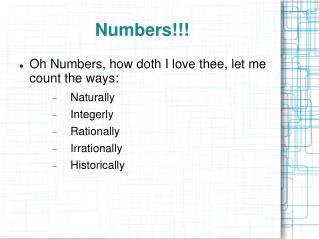 Standard 1 – Number and Numerical Operations - . the following are two rational numbers greater than 1 and less than 2:

Jeopardy - . final jeopardy. $100 question from numbers &amp; operations. aubrey can run at a pace of 6 miles per

The 5S Numbers Game - . a fun and exciting way to present the 5s concepts to our team!. this is a simple training game we

Why was Caspar Wessel’s geometrical representation of the complex numbers ignored at his time? - . qu’est-ce que la

MULTIPLYING GREATER NUMBERS - . 4 th grade. review what you know multiple product factors round one way to estimate with