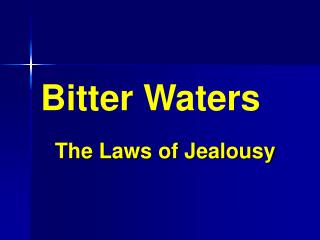 Bitter Waters. The Laws of Jealousy. Numbers Chapter 5 is a teaching about the reconciliation between the Bride and the Groom. Numbers 5:12-18 12 "Speak to the children of Israel, and say to them: 'If any man's wife goes astray and behaves unfaithfully toward him,

Bitter Waters - . the laws of jealousy. numbers 5 a teaching about the reconciliation between b ride and groom. numbers

A Bitter Revolution - China’s struggle with the modern world. a bitter revolution. the making of a new china.

Bitter Medicine Blog - I am sheniqka miller, i have experienced such a great amount in my life that it has altered me. i

From Bitter to Sweet - . a journey in the wilderness. from bitter to sweet. ex 15 22 so moses brought israel from the red

Salty Waters - . the solar still challenge. what happens if you have no access to fresh water?. how can you desalinate

Natural Waters - . take a few minutes to talk about water… cycling between reservoirs (hydrologic cycle) what are