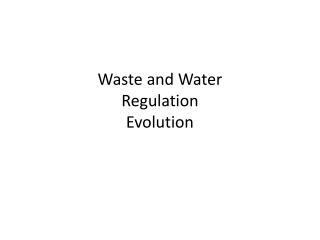 Waste and Water Regulation Evolution . Animal’s Urinary and Osmoregulatory systems. Your Goal. Be able to tell the story of kidney evolution as an essay. . Roles of the kidney. excretion homeostasis osmoregulation regulation of salts in the body regulation of pH

Turbidity - . fall 2010 nikki byrd. what is turbidity?. measure of water clarity degree to which water is scattered and

Mechanisms of Evolution - . cscope unit:09 lesson: 01. evolution. the theory of evolution describes the slow change in