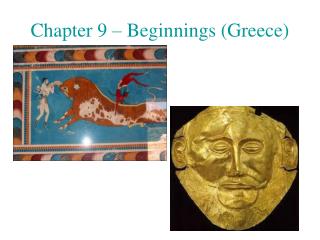 Chapter 9 – Beginnings (Greece). Lesson Essential Question 1 – Where are the important features and cities of the Minoans and Mycenaeans on a map?. A. Locate and label items on the map of the Aegean World. Chapter Focus Why It’s Important (p. 151).

Radiochemistry - The Integration of Physics and Chemistry - the Beginnings - . - klaproth uranium discovered -

The beginnings of agriculture - . most historians agree that humankind existed for thousands of years before they began