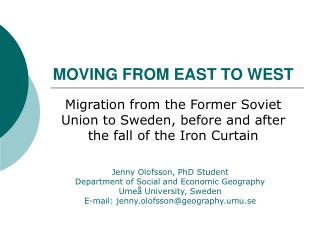 MOVING FROM EAST TO WEST MOVING FROM EAST TO WEST. Migration from the Former Soviet Union to Sweden, before and after the fall of the Iron Curtain. Jenny Olofsson, PhD Student Department of Social and Economic Geography Umeå University, Sweden E-mail: jenny.olofsson@geography.umu.se. Where in the world is Sweden?.

MOVING FROM EAST TO WEST

Malaysia - . the country is made up of two regions, peninsula malaysia and east malaysia (borneo) across the south china

10/16 do now - . a racing car is moving around the circular track of radius 300 meters shown. at the instant when the

Geographical position: - Romania is situated in southeastern europe and it borders on ukraine (north and east), the