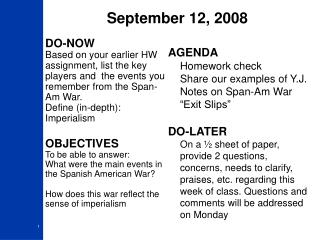 September 12, 2008. DO-NOW Based on your earlier HW assignment, list the key players and the events you remember from the Span-Am War. Define (in-depth): Imperialism OBJECTIVES To be able to answer: What were the main events in the Spanish American War? September 12, 2008 - . medicaid infrastructure grant task force. employment: a right and a responsibility. everyone with

Patient Safety Curriculum September 12, 2008 - . definitions. &quot;a medical error is anything that happened in my

September 2008 - Public opinion on coverage for the uninsured. presented to the alliance for health reform. gary a.

September, 2008 - . what is albinvest?. government agency created in march 2006 member of the ministry of economy, trade